Why is Consecration Important?

Why is Consecration important?

How do I know this is true?  I knew everything she was doing concerning me.  My eyes were always set on her. I could see her blessings plain as day. Anything she did on my behalf, I knew it and I could also sense it.  And I am always very gracious and thankful to her.

Now just about everything in my life has changed.  Today, I belong to her  (You can read my journey at My Catholic Conversion – A Marian Journey into the Church).  People may disagree and throw rocks at that statement, but it is true.  I am hers.  I try to do as she says but I am not perfect. She has made my life, my marriage, my relationships better than they have ever been.  I am happier than I have ever been in all my 61 years today and it is because of what she has done and all of this was initiated by Jesus.  Read it for yourself at the link above.

She leads us to her Son

Bringing us closer to Jesus is what it is all about, and the job she does is far superior to anyone.  I have come further along in my spiritual life with the guidance of the Virgin Mary than I could have gotten any other way.  For me, it has been that simple.  I have since learned that she knows a lot more about where I need to be going than I do and how to get there than I could ever find for myself and that, frankly, I don’t know how to get there.  Sure, people tell me what I need to do and what the scriptures say I need to do.  But I believe she knows the scriptures better than I do; this doesn’t mean I ignore the scriptures; I read them all the time.  So, I consecrated myself to her because I KNEW she would take me where I needed to go, and we were going to do it her way – the right way.  Failure was not an option with her.

An intimate relationship with her

An intimate relationship with Our Lady is one of the greatest gifts I have received in this life.  I can not emphasize how important and great this gift is.  When it is a time of need for me, Our Lady will be there.  I don’t recall her ever forgetting about me because she had to run out to the store to grab “a few things.”  When her children need her, she comes.

If you manage to acquire a relationship with her, I believe there is a very good chance it will become your most valuable possession as mine has.

Your spiritual depth will change.  I guarantee it.  If you sincerely and honestly consecrate yourself to the Blessed Virgin, and live your life accordingly, you will begin to realize the depth changes in your own personal spiritual life.  If you do everything you can to accomplish what that last sentence states, you will change.  Absolutely.

Most people don’t even know what spiritual depth is.  But if you follow her, you will see it in yourself.

Learning to LET GO is why consecration is important

Learning to let go and let the Blessed Mother handle them is a tall order, but it can be done.  I have done it once or twice but it is hard. The only mandatory requirement is trust and it’s a big one.  You must trust her in order to let her handle your large life problems.  This is not easy and the larger the problems are, the harder it is.  As a matter of fact, it is probably one of the hardest things I have had to do in my walk with the Virgin Mary.

I do not practice trusting in her by asking her for trivial things, either.  With her, it’s always live.

How I learned this

I recently had to make a decision on something that had tolerated for too long, I could go no further.  This is the number one request I have ever made of heaven in all of my years.  I was helpless.  My family was on the line and this was bigger than my life being in jeopardy for health reasons.  I went to my best friend for help and I asked for her to do something of her choosing.

I could no longer live this way.  Three different times in one night I asked her for help because I could not sleep. I got on my hands and knees and begged like a beggar crying out for food.  The most awesome humbling feeling came over me the first time I did this.  It was a feeling of tremendous privilege is the only way to describe this.  It was a tremendous privilege, regardless of the outcome, to take the most important request of my entire life to my best friend and let them handle it.  I cried.

I put it in her hands

Out of desperation, I put this entire problem in her hands and resided myself to accepting whatever she decided.  I trusted her. It felt like my life was in her hands. This was very difficult.

The next morning, I knew by something that was said, that she had already gone to Jesus with my request and he granted it (this is how this works … she approaches her Son with requests on our behalf).  Four days later I got a great big confirmation that it was true.  Believe that I thanked her from the bottom of my heart.

Just like at other critical times in my life, when all was over, I walked away knowing who I belong to without a shadow of a doubt.

An event, like the one described above, demonstrates to us how important we are and what we mean to her, regardless of our flaws.  She was in no way forced to do this.  She elected to do it.  If I did not know her …  I am so thankful I do!

In his book The Last Exorcist—composed of texts from various blogs, including Gloria TV and Testimonianze di fede—Fr. Amorth reports an entire dialogue he had, in his role as exorcist, with the devil.

Father Amorth: “What are the virtues of the Madonna that make you angriest?”

Demon: “I am more afraid when you say the Madonna’s name, because I am more humiliated by being beaten by a simple creature, than by Him…”

Father Amorth: “Tell me the fourth characteristic of the Madonna that makes you most angry!”

Demon: “Because she always defeats me, because she was never compromised by any taint of sin!”

“During an exorcism,” Father Amorth remembers, “Satan told me, through the possessed person, ‘Every Hail Mary of the Rosary is a blow to the head for me; if Christians knew the power of the Rosary, it would be the end of me!’”

The above tells me all I need to know.  Although it is a great, great privilege to be close to the Holy Mother, there are other reasons to be closely associated with her.

Militia of the Immaculata - What is Consecration Part 2 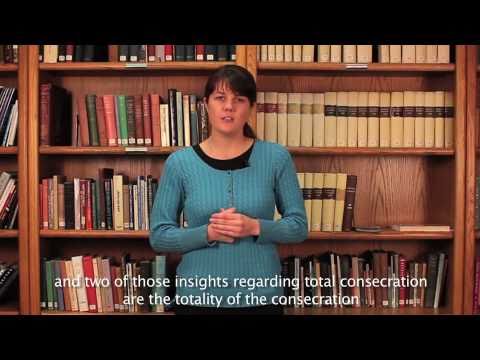 You Cannot Love someone you do not know.

You Cannot totally give yourself to Someone you do not Love.

Why you should restart your Marian devotion

Thank You for Visiting our Site

We strive to provide the most complete and highest quality material we can for you, our readers.  Although not perfect,
it is our desire and prayer that you benefit from our efforts…